I dived on the very tip of southern Leyte (Philippines) at Padre Burgos and around Limasawa island. When I was there unfortunately the weather was quite bad, a lot of wind and low visibility so we couldn't visit the dive sites around Sogod Bay (or Sogot Bay) where you find the whale sharks. Look at this report (whitetip) in the internet about whale shark sightings in this area. Seems like you can also do whaleshark watching in Pamilacan in Bohol.

You can find detailed information about dive operators, dive safety, dive conditions, climate, hotels and how to get to Leyte (and other islands in the Visayas) on a separate page ready to print.

There are three main dive areas in southern Leyte - around the very southern tip on the peninsula of Tangkaan (Tanka-an), then around the island of Limasawa and on the coast of Panoan island. Tangkaan and Limasawa are reached by boat from either San Roque or Padre Burgos. To get to Sogod Bay you will have to arrange a day trip with your dive operator or travel by bus and ferry, though there are no dive operators on Panoan island, so you will only be able to hire a boat and do some snorkeling - and perhaps see some whale sharks if you are lucky!

1. Turtle Rock: At 36m depth lies a large coral rock, very nicely covered with gorgonians, on 22m there are two smaller rocks. Everywhere are a lot of small fish

2. Coral Garden: this dive site is not so nice anymore, since some dynamite was dropped here.

3. Heaven's gate: This dive site lies at the very tip of southern Leyte. A steep slope covered with soft corals, sponges and anemones. We found quite a lot of different species of nudibranchs. This dive site is also called Tangkaan point (Tanka-an).

4. Medic care: Steep wall with large sponges and table corals. There should be some frogfish living here, though we didn't find any on our dives. There is a very nice large coral block on 44m.

5. Max Climax Wall: You can enter from the beach. This is a dive on a wall with a lot of crevices and cracks.

Mangroves: Try some snorkeling at the mangrove areas close to Günters resort. We had an great time there, found some jellyfish, special cardinal fishes, some filefish, flatworms, moray eels and an interesting scorpionfish I had only seen once in Lembeh strait (Sulawesi). There are large sand areas with gray and red starfish all over.

7. Adrian's Cove: a wall with a lot of coves and overhangs, nicely covered bushes of black coral, staghorn corals and many sea squirts. Some sandy areas.

9. Bonnie's place: This dive site at the southern tip of Limasawa is a slope.

Sogod Bay (or Sogot Bay) is known for the whale sharks that migrate through it. Best time to see the whalesharks is November untill the end of May. Southern Leyte Divers has only a small boat (see photo below) and they only go to these areas with enough people and when the weather is calm! The so called whale shark guarantee is only for these occasions, not generally speaking. Peter (Dive Resort Lungsodaan) seems to have a larger boat (I haven't checked) so he should be able to visit these dive sites more often. The new resort, Sogod Bay Scuba Resort has a 71ft bunker boat which can accommodate up to 15 divers. 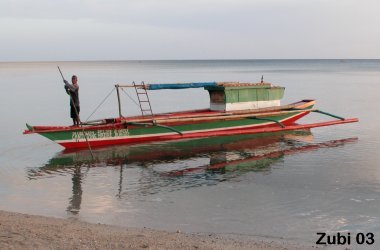 10. Sogot Bay: Liloan Sogod Bay is a good place to hope to see whalesharks, manta rays, and several species of shark. Whales and dolphins might be seen on the way there.

Some history of Leyte

The US army landing on Leyte: on the 25th the first Japanese attack force approached Leyte Gulf through Suriago Strait. The US 7th fleet was lying in wait . 6 battleship and destroyers were sunk. The delayed Japanese center force passed through San Bernardino Strait too late but surprised one of 7th fleet escort carriers, two US ships were sunk.
The Japanes retreated but then ordered two suicide air attacks (Kamikaze) which resulted in sinking an US escort carrier with 1125 persons lost.
Meanwhile Admiral Halsey ordered an attack on the aircraft-less Japanese carriers around Cape Engano and sank or damaged 8 of them. The remaining Japanese fleet was pursued and during the next 2 days several cruisers and destroyers were sunk. An US destroyer escort was torpedoed by submarine and a US destroyer sunk by suicide Japanese aircraft attacks over the next few days.
Seeking to check the US Army invasion of Leyte the Japanese dispatched reinforcement convoys from Manila to Ormoc. On the 11th November 1944 all the transports, four destroyers and mine sweepers were sunk by an aircraft attack (nearly 350 aircrafts) and nearly 10'000 Japanese soldiers were lost. The Japanese tried again to reinforce and supply their troops several times, but during November and December several ships were sunk and the US troops couldn't be evicted from Leyte.
After Leyte the next stepping stone in the Philippines was Mindoro (Luzon Strait) and Luzon (Lingayan Gulf). The Philippines was then finally liberated from the Japanese.

For more information about the battle of the Philippine Sea look at Angelfire and Odyssey or read the book "Warship losses of world war two" by David Brown (Arms and Armour press, London). There are quite a lot of wrecks around southern Leyte, but Günter Mosch from Southern Leyte Divers said, he has checked the coordinates from battle field reports and they all lie in very deep waters (80 to 100m plus).

Map of the Visayas, Philippines

You can find detailed information about dive operators, dive safety, dive conditions, climate, hotels and how to get to Leyte (and other islands in the Visayas) on a separate page ready to print.

I have visited all dive sites on this page except Sipalay, Sogot Bay and Anda. I added some more information in 2003 after my seventh trip to this area.

. Copyright Teresa Zubi (write to me)